Depart on an overnight flight to Israel.

Arrive Ben Gurion Airport. Assistance through customs by our airport representative. Transfer to the hotel in Tel Aviv. Check in to your hotel Dinner will be served 7:00 PM in the main dinning room of hotel.

After breakfast we will have our orientation meeting with Frank Gaffney, Bill Murray, Bill Federer, Ron Wexler, as well as our guides and staff.Our tour will begin with a short visit to the ancient city of Jaffa,followed by our departure from the city driving to Ariel and the surrounding area. Our focus in Ariel will be their security and their defense of this stronghold in theÂwest bankÂ. We will also hear about the security issues of the local Christian - Palestinians living in the region. Next stop will be at the 2000 years old theater in ancient Caesarea.Visit the i the Roman amphitheater and the seaport from which the Apostle Paul sailed to Rome. Continue north along the coastal road to the beautiful city of Haifa overlooking the Mediterranean Sea, From the mountain top we will enjoy a picturesque panoramic view of the port and gulf beneath.

Travel to Mount Carmel to see the site of Elijah's triumph over the Baal priests. A great panoramic view overlooking the Valley of Jesrael, also known as the Plain of Armageddon of latter day prophesies. From here we will continue to the Sea of Galilee and the city of Tiberias. Check into your hotel. Following dinner a panel discussion:ÂIsraeli/Arabs in the GalileeÂ.

Breakfast at your hotel. We begin our day on the Sea of Galilee- here was the ministry of Jesus. We will visit the places mentioned in the gospels, starting with a boat ride across the Sea of Galilee. We will board in Tiberias and disembark in Nof Ginosar. We will visit the Primacy of Peter and will proceed to Capernaum to see the remains of an early church, the remnants of Peter's house, and the ancient synagogue. We continue to the Mount of Beatitudes and listen to the ÂSermon on the MountÂ on the hill where Jesus preached it overlooking the Sea of Galilee.Close by we will visit the Golan Heights and gather a better understanding of the region's security and defense. 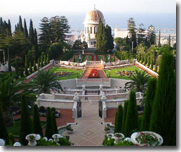 Optional: Jordan River visit at ÂYardenitÂ for a water baptismal opportunity. Return to your hotel for dinner. This evening a panels discussion:

After breakfast we will take leave of the Galilee making our way up to Jerusalem. Our first stop will be Nazareth, here we will visit the Mt of Precipice, identified as the mountain from which the people of Nazareth tried to push Jesus after he infuriated them with his sermon declaring himself the Messiah (Luke 4). The sheer cliff, 397 meters high, provides one of the best, observation points over the Jezrael Valley and the surrounding mountains: The Carmel, Moreh, Gilboa and Mt Tabor. We will continue to ÂGideon's SpringsÂwhere Gideon selected his soldiers to do battle against the Midianites. We will then travel across the Jordan Valley road south past Jericho along the border with Jordan. Here we will have an opportunity to better understand the fragile nature of borders of Israel. Continue to Jerusalem stopping atop Mt Scopus for our first view of the "Golden City of Jerusalem".. Proceed to your hotel for check in. 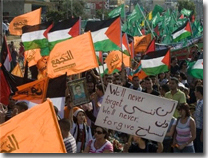 This evening we are all invited to a ÂKabalat ShabbatÂ the receiving of the Sabbath service. This is a unique and most fervent service at the Western Wall with many Jerusalem Jewish worshipers. This service will be followed by a traditional Shabbat Dinner with Ron Wexler. Dinner and overnight in Jerusalem 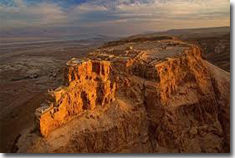 This morning we will be making our way to the lowest point on earth, the Dead Sea.Driving along the coastal line we make our way to the Massada. This was the last pocket of insurrection in the Jewish rebellion against the Roman Empire where 960 men, women and children defied the might of Rome and fought for three years after the destruction of Jerusalem. We will visit king Herod's Palace, the synagogue, and a very sophisticated water and irrigation systems 2000 years old. On top of the rock we will hear a presentation by Ron Wexler - ÂNever againÂ Later in the day a special treat awaits us as we go bathing in the Âheavy waterÂ of the Dead Sea. Return to Jerusalem. After dinner this evenings panel discussion is :ÂJerusalem & IslamÂ 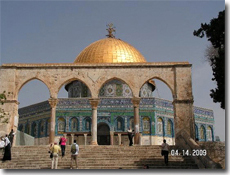 We will start our touring program today with a visit to the top of the Mount of Olives. From this incredible vantage point our guides will point out all of the important sites of this ancient holy city. Our tour inside the walled city will include, the Temple Mount - Mt. Moriah where Abraham was to sacrifice Isaac. We will see the Dome of the Rock and al-Aqsa Mosque that now stand there.We now make our way to the Old City, entering through the Lion's Gate from where we will trace the footsteps of Jesus - the Pool of Bethesda, Stephen's Gate, St. Ann's Church and the Via Dolorosa, the way of the agony and the Stations of the Cross.

This afternoon we visit the reconstructed Jewish Quarter. We will walk through the Cardo, the original roman street and see the remains of the massive wall built by King Hezekiah. We will also tour the southern wall excavations - this southern side of the temple was the main entrance for the common folk, whereas the priests and levites had their own entrance from the higher western side. Return to your hotel for dinner. Our program this evening is: ÂSecurity, defense & intelligence - the reality of the Middle EastÂ

After breakfast we will make our way across the city to the Israel Musueum where we will begin our program with a visit at the scale model of Jerusalem from the time of Jesus.. Next we will visit the "Shrine of the Book", Here you will find many of the Dead Sea scrolls as well as priceless art effects from the time and era of the Esseans - the Dead Sea scrolls scribes. Next we will leave the city of Jerusalem driving to Latrun,which is the official Israel Defense Force Commemoration Center and armament display. Latrun is the fortress that was strategically built on Israel's main crossroads and throughout history protected the City of Jerusalem. The program here will include laying a wreath at the "Wall of Names".Return to Jerusalem. After dinner the panel discussion is: ÂIsrael- Western society's last line of defenseÂ 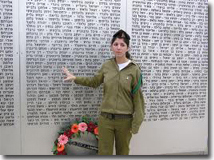 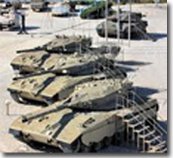 Breakfast at your hotel. Our last day in Jerusalem will begin with a visit to the Garden Tomb. Here Bill Murray will present a teaching on the biblical accounts surrounding the crucifixion and resurrection of Christ(this will also be an opportunity for those wish to celebrate communion to do so at the site of the empty tomb). Our last visit will be Yad Va'Shem, a museum built in memory of the six million Jews murdered by the Nazis in World War II and also a commemoration the righteous gentiles who by risking their own lives, rescued Jews from certain death.

Transfer to the airport to board a domestic flight to Eilat, the beautiful resort city on the shores of the Red Sea. Enjoy the rest of the day in this little paradise.

Full day tour to the amazing "red city" of Petra. Transfer from your hotel to the Arava border point with Jordan, cross into Jordan and drive to the rose city of Petra. Visit to the wonders of the ancient city of Petra the Rose Red City carved by the Nabataeans out of solid rock. A visit to Petra is one of the true highlights of any tour to the Middle East. For hundreds of years, Petra was forgotten until it was rediscovered in 1812. The entire city is carved into the sides of a deep gorge, which is entered on foot or by horse-drawn carriages. In the late afternoon return to your hotel in Eilat .

AM free in Eilat, noon check out from your room, late afternoon flight to Ben Gurion International Airport to connect to your flight back to North America.

1. Transfer from Jerusalem to BG Airport
2. Three nights in a 5 star Eilat Hotel/Resort including breakfasts daily
3. Round trip flights to and from Eilat
4. Full day Petra tour including lunch
5. Border taxes and tips on tour.